What Happened With Denmark’s ‘Iodine Experiment’?

When it comes to scientific research, I think it is important that we get clarity. Not only on the results, but how things are done. That’s why I want to talk to you about this fascinating study that came out of Denmark surrounding their own experiment with iodine.

It’s one of the main reasons why I put together my Ultimate Hypothyroid Bundle, to help you gain clarity around what you need, on a daily basis, for the health of your thyroid (Click Here: Learn more about this bundle).

One of the key parts of this is ensuring that you are getting the right amounts of iodine. As you may well know and remember, we have talked about iodine at length before.

Overall, it’s important to know that even the smallest changes to iodine intake can have a profound effect on the health of your thyroid and thyroid function.

So, without further ado, let’s break this study down for you…

Denmark was a country tracked very closely, because they were one of the most recent industrialized nations to fortify their salt with iodine.

They did that because they had a higher rate of goiter (Click Here: More on goiters and goitrogen clarity), and specifically, a subtype called toxic multinodular goiter.1

So, what does that mean? Here’s the breakdown:

Basically, this condition entails lumps in the thyroid that your body isn’t asking to work, but are pouring out extra thyroid hormone and causing issues for your system.

This condition is one, like many, that is especially sensitive to iodine intake. We see it much more commonly in the extremes of way too much or way too little iodine.

In fact, toxic multinodular goiter is pretty rare outside of those cases. In the western world, for example, adults rarely get this condition unless they are exposed to an extremely high dose of iodine (especially before a CT scan or an MRI).

But, in some parts of the world, they were so low that they had higher rates of it for that reason, too.

Turning our attention back to Denmark, going into this experiment researchers were operating with some important data. It came from the late 90’s, specifically 1997, their rate was 97.5 cases per 100,000 people.

Prior to that, in 1991, it was about 18 cases per 100,000 people. After seeing this, what they wanted to know is why those numbers of cases went up so high over the course of that few years. They weren’t sure of the clear reason, but they thought iodine fortification might help. 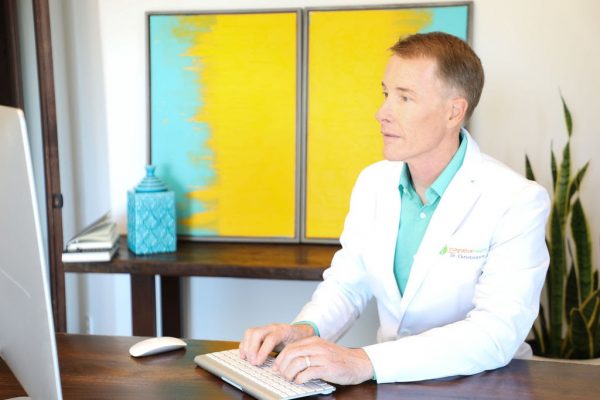 Fortifying iodine is exactly what they did. In addition to that, they meticulously tracked everything so they could keep an eye on what was happening and how people were responding to it.

After things were all said and done, the rates for toxic multinodular goiter went down from their peak in 1997, but they were still way above the lower levels earlier in that same decade.

That meant that, by the early 2000’s, researchers were looking at about 48 cases of toxic multinodular goiter per 100,000 people. This is somewhere in the middle of the highest and lowest years in question.

This meant that their attempts at correcting this issue were working, but it wasn’t a clear win. In addition to that, they found many other things contributing to these goiters, including:

Because they were aware of pitfalls, these researchers wanted to look at goiter but really all types of thyroid disease. Thankfully, that also meant that they were so smart, and so deliberate, in how they went about performing this research.

How They Did It

The intent of the researchers was to raise the intake of iodine by about 50 micrograms per day. There was a lot of thought that went into that decision (Click Here: More on iodine amounts and how much you should have per day).

So, to get a better sense of this, here is what they did. Quick background for you, there is a certain type of salt that is used in Danish rye bread. They chose to fortify that salt with just enough to get the average intake up by 50 mcg.

Key Insight: Because so many Danish people have this kind of Danish rye bread on a daily basis, it revealed itself as a very predictable, and controllable, way to increase iodine intake on average.

A lot of monitoring went into this process, so the researchers could understand how it was affecting people and what they could learn from it.

They did this in three different, and distinct, ways:

In the first one, they took a group of people in different areas that had different amounts of iodine going into it. This meant that some areas were lower than others.

They were then compared to similar groups after fortification had stabilized, as well as each year during fortification, as well.

What they also did was look at the overall rates of all types of thyroid disease, throughout the country. They wanted a good grasp of where it was beforehand, and how it would play out in the following years. Casting as wide a net as possible.

This was done with over 550,000 people living in those same areas.

The last thing that they did was take a group of people that were tracked prior to this study, and compared them to a similar group after fortification. This way, they could see what was different in these very similar groups.

What Was Most Useful?

For the purposes of this research, it was incredibly helpful that Denmark’s medical system is not only socialized but centralized. This offered an incredible amount of clean, consistent data, throughout the nation, at the blink of an eye.

This allowed them to look into the following essential inquiries:

All of these variables were looked at, and they started tracking them three years before fortification, and 15 years after fortification. It was ridiculously thorough.

Researchers also performed in-depth research on the overall population to see how well this tracked, and to see if they went up by the desired amount.

Did Their Method Work?

By and large, the researchers here nailed their target. The average iodine intake for a Danish person went up by 50 mcg, so they achieved exactly what they wanted to do.

I have often had conversations with people struggling with their thyroid, and one of the questions I often find myself asking is, “do you take a multivitamin that has iodine in it?”

In many cases, I’ll be met with a response from someone who has a multivitamin with 75 mcg, which they seem to think isn’t all that much. So, let’s see how ONLY 50 mcg affected this large group of people.

For the following 15 years after fortification, they saw increases in:

In the first three years alone, prescription medication for thyroid medication shot up by 42%. The rates of hypothyroidism went up dramatically above the baseline.3

Yes, it was worse at first, but even over the next 15 years, it continued to progress without stopping. 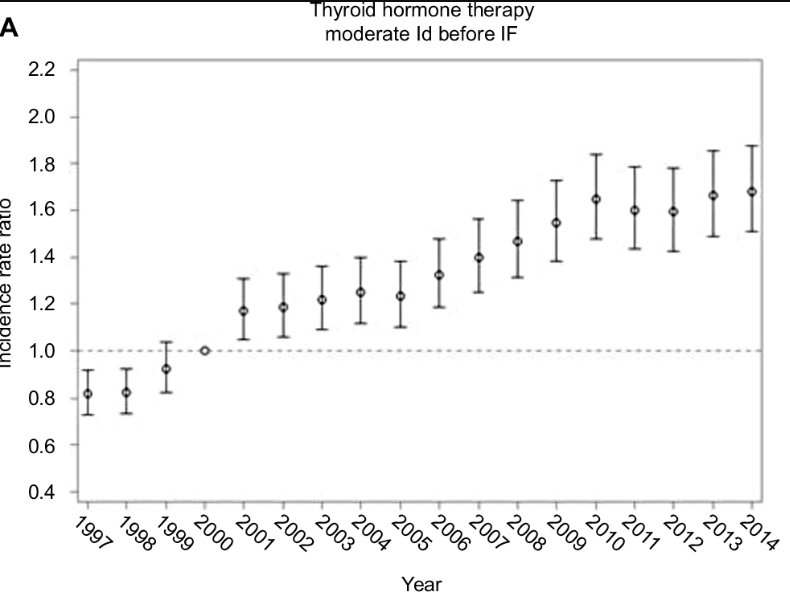 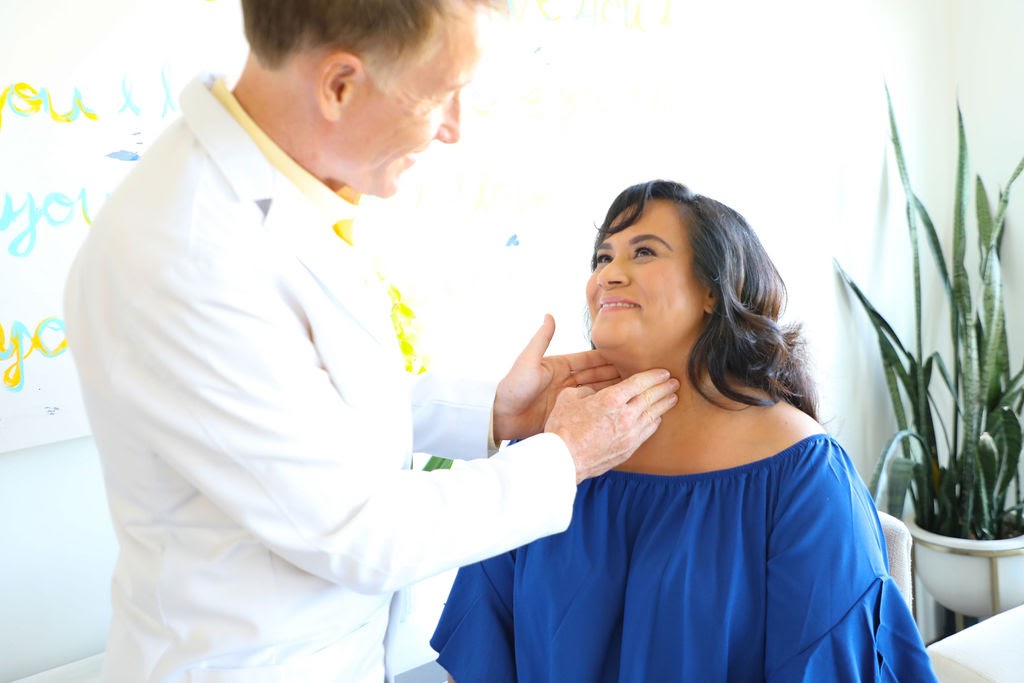 This one is worth calling out. Autoimmune thyroid disease, specifically, went up by 53%. On the other hand, non-specific hyperthyroidism went up by 49%.4

Seeing numbers like these rise are scary, there is no doubt, but the thing I would love for you to keep in mind is that these people were not overdosed on iodine.

In fact, at no point did people hit a level of iodine that would be considered an inappropriate level. That is what is so shocking, because even these subtle changes can lead to huge effects on the body and health overall.

The researchers also looked at, along with hypothyroidism, what other factors affect other facets of health. What they saw was that, as thyroid function slowed down in the population, weight went up.

Key Insight: There was about an average of 8.8 pounds of weight gain even in those who had subtle changes in thyroid function.

They also showed secondary blood pressure elevations amongst those same people. So, even those that didn’t get overt thyroid disease, sub-optimal TSH scores led to weight gain and higher blood pressure.5

What About Historical Comparisons?

In past research, residents in Denmark often had stronger thyroid function as they got older. TSH scores would get a little bit lower for each decade of life, and this is even considering the fact that some would get this aforementioned toxic multinodular goiter.6

Key Insight: That’s the opposite for folks here in the United States, where age typically indicates an increase in TSH scores.

That said, after iodine fortification, the opposite occurred. Researchers found gradual increases in TSH that correlated with age, and this was very common.

What Can We Learn From This Research?

What we learned from Denmark is that, before and after iodine fortification, the lowest rates of thyroid were in populations that were about 50-100 mcg per day of iodine.

In addition to that, we also saw that:

The main thing to know about today’s discussion is that even small amounts and minor shifts can result in large differences when it comes to iodine.

Therefore, it’s worth knowing and interrogating exactly how much you’re getting of it. Denmark taught us a lot, and we need to work with it.

Interested in learning more about the state of your thyroid? Take the Thyroid Quiz (Click Here: Take The Quiz) today to unlock more, and to discover the action steps you can take to feeling better starting now.