Cooking oils come in all shapes, sizes, and types, but have you considered recently switching up your preferred choice of oil? I’d like to introduce you to something new: algae cooking oil! Let me tell you a bit more about it…

Algae oil is a great source of essential fats, it has a high smoke point, pretty neutral flavor, and is commonly available in many health food stores. Sounds like a pretty great combination, right? That’s just the beginning.

After all, knowing what you’re putting into your body matters, for obvious reasons. That also applies to the world of supplements, which is exactly the thinking I applied when developing my Daily Reset Packs.

In this article, I want to explore with you why you might want to make the switch to algae cooking oil. After all, it might just be the next best addition to your kitchen!

What Is Algae Oil?

When we think about the term “essential fats,” we typically think of the following:

You will also likely hear about omega in reference to omega-9 fats, which are neutral but not essential. The two big ones are 3 and 6, which we need and cannot otherwise make.

Generally speaking, though, when we think about oils and fats we need to consider some of the following questions to determine whether they are right for us:

For cooking oils, we also want to be aware of the smoking point. This helps to know when to avoid using oil to saute a dish because they will quickly oxidize and begin to make free radicals.

As a general concept, oils are always processed foods. For this reason, do not make any one oil your main source of caloric intake by any means. Some of it is fine, though, especially for cooking purposes.

Which Oils Are “Helpful”?

You will likely hear a lot about certain oils being helpful, and others being harmful, but what is the truth? In most cases, what people are looking at is what we know as “substitution studies.”

This is not so much whether this oil being added resulted in people getting healthy, but when this was given instead of something else. For instance, when one oil is used instead of another, or oil in place of a highly-processed food.

Substitutions are useful, but they are not things you want to go out of your way to add in massive amounts to your diet.

What About Algae Oil?

So, let’s start with a more thorough breakdown of algae oil and what it contains. To start, this is a vegan product and comes from one single manufacturer (at the time of this article).

This is hybridized algae, which means it is not genetically changed. Rather, it is bred. It is also pressed for oil extraction, which basically means it is squeezed until the oil comes out.

In general, algae oil is the highest in the monounsaturated fatty acids. Those are the omega-9 fats we referenced earlier, and are highly esteemed from olive oil.

While they are not fats that we need, they seem to not push our inflammation in either direction. So, let’s think about inflammation from a moment, which we make from:

Ultimately, inflammation is orchestrated from a group of chemicals called eicosanoids. Eicosanoids, together, are all modified fats.

Then, we have some fats that do not get involved at all. That is the seeming benefit of these monounsaturated fats.

Even though algae oil is from the ocean, assays show that it is iodine-free. If you are on the Thyroid Reset Diet, you can consider it a green-light food.

When it comes to saturated fats, I don’t want you to think of them as a ‘big bad’ or a demon in medical conversations. That’s because a certain amount of them, around 5-10% of calories, is completely harmless.

If you are interested in learning more about saturated fats, please feel free to read my comprehensive guide to them right here.

That said, they are also neither healthy foods nor a silver bullet for better health. There is good data that the further you get above that 5-10% level, the more they do raise certain risks. This includes things like:

Key Insight: When it comes to saturated fats, some are harmless. But, you do want to keep your overall intake within a certain window to avoid potential risks to your health. 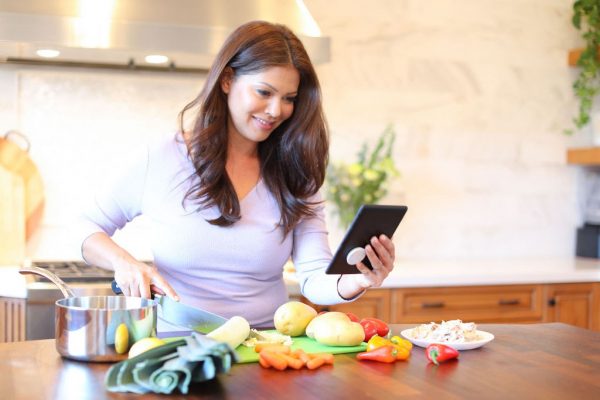 Other Benefits of Algae Oil

So, now that we have broken down a bit of the science, what other benefits does algae oil come with? The first worth mentioning is the smoke point.

If you haven’t heard of this term before, it is essentially the temperature in which an oil begins to oxidize (and, therefore, create smoke — which results in the term “smoke point.”)

For algae oil, that temperature is about 485ºF. That is pretty high, and amongst the highest out of all the potential oils out there.

What does this mean for us? Well, with a high smoke point means a more versatile oil. This means that you can use algae oil for pretty much general use in the kitchen!

When it comes to my top favorite oils, in general, algae oil ranks high up there along with:

Along with algae oil, each of these comes with a fairly neutral flavor, high smoke points, and they have got varying properties.

There’s a lot of reasons to get behind algae oil, so let’s keep exploring them! Algae oil is also well known for being a rather environmentally-friendly product.

It doesn’t have any real carbon footprint, there are not high amounts of water required to make it, so there are some additional benefits if you want to consume sustainable products.

A little drawback of it, though, is that we simply do not have a large amount of massive, long-term population studies surrounding algae oil.

There is no reason to think there would be any real issues, because of its general profile and lack of any negative constituents, but we simply do not have that data.

Key Insight: On the other hand, we have that, for better or worse, for other oils. So, perhaps, this is simply one stumbling point for algae oil. We do not confidently know the entire story!

Algae oil can also be a little bit less cost-effective than other oils. So, while it is generally very versatile and can be used in place of other oils, it does run a bit more expensive.

Have you been thinking about your health in a more holistic fashion? Considering what cooking oils you might use is the first step, but there is so much more that you can do. If you are concerned about the health of your thyroid, try taking the Thyroid Quiz today.

In short, only a few questions can help unlock a world of insight, and meaningful action steps, to benefit your long-term health and wellness. I hope you will give it a shot today, and that what you can learn can begin the journey to changing your life for the better.