Good morning! Dr. C here with you. As expected, it is getting worse.

I suggest you start voluntary self-isolation if you haven’t already. What does that mean? It means staying at home for everything besides food and medication. Do not directly interact with other people besides those you live with.

The Canadian and American governments have not mandated self-isolation but there is a good chance they soon will.

Remember – it would be a good thing if you were to look back in a few months and feel like you overreacted ?

Do you have any symptoms? Look at Yesterday’s post.

Do you have your pantry stocked? Look at Wednesday’s post.

If you have access to nature, this is a great time to make use of it. The problem in big cities is that you won’t be the only one with this idea. I’ve noticed that the trails are busier than they have ever been.

Ryan and I went to an area to do some bouldering. To get there we had to start at a popular trailhead. We took an immediate detour on a spur trail to be able to do proper social distancing. There were a few times in which we met hikers going in the opposite direction. Everyone automatically stuck to the furthest right side of the trail and we had plenty of room between us.

One group had some little kids. They were wandering around having fun. I’m sure they were past due to be outside. They were walking right toward us and their parents were on the opposite side of the trail. We stopped and started to walk off from the trail so we would not be too close to anyone and the parents called them over.

Near the bouldering area, Ryan found something really special. We came across a baby desert tortoise. 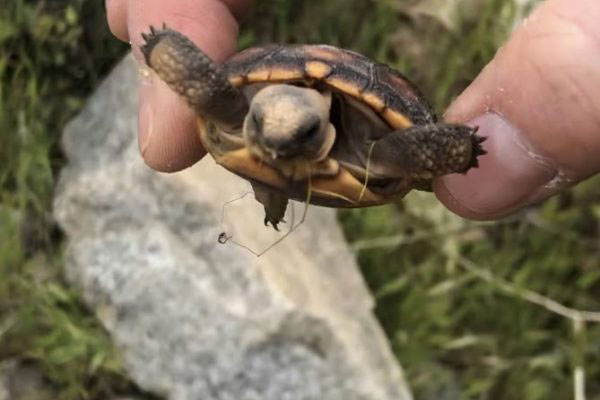 I just picked him up long enough for the picture. I wanted to show how tiny he was!

With all the time I’ve spent outside, I’ve only seen adult desert tortoises a few times, and never a baby. They can live to be over 80 years old! This little cutie may be around to welcome the next century.

Find a nice area off the beaten path. There are happy adventures waiting for you outside.

A curve or a spike

There has been much talk about flattening the curve. The idea is that if 1/2 of Americans get COVID-19, the faster it happens, the less the health care system will be able to keep up.

Yet In the coming days, the number of new cases of COVID-19 in the US will likely double. Part of it will be more people who are sick. The other part will be an artifact of testing. Most who need testing have not had access. For those who have been tested, many are just getting results.

Another problem with our current testing is that we are only able to measure the virus itself when it is present in large enough amounts in the bloodstream. The tests in use are called PCR or polymerase chain reaction. Basically it copies the RNA genetic code of the virus so it can be easily identified. We know that the test does miss some people who are infected and does wrongly diagnose some who are not but we don’t yet know the numbers.

Other tests for infections measure the antibodies that the host’s immune system makes to fight the virus. In general, antibody tests are better at identifying people who were exposed to an infection and successfully fought it off, or those who have a milder version of the infection.

People who test negative with the current test could possibly still have a mild form of it and may become contagious in the coming days.

As testing becomes more available, there may be a false sense of security among those who have had negative tests.

The habit we are settling into is oatmeal and shakes for breakfast, leftovers for lunch, frozen fruit, nuts, and protein powder for snacks, and a new dish for each dinner with enough for leftovers the following day.