For the Love of Clams

You might not normally think about clams when it comes to your diet – heck, you might never have thought about them before today. I’d like to challenge you to reconsider:

Clams come with a whole host of benefits, they are an environmentally-sound food choice, completely sustainable, low in toxins, high in many hard-to-find nutrients, easy to prepare, and safe for limited diets.

It also helps that, when cooked properly, they are super tasty. Here’s what you need to know about clams, what they provide, and why you might find yourself at the seafood counter of your local grocery store sooner than later… 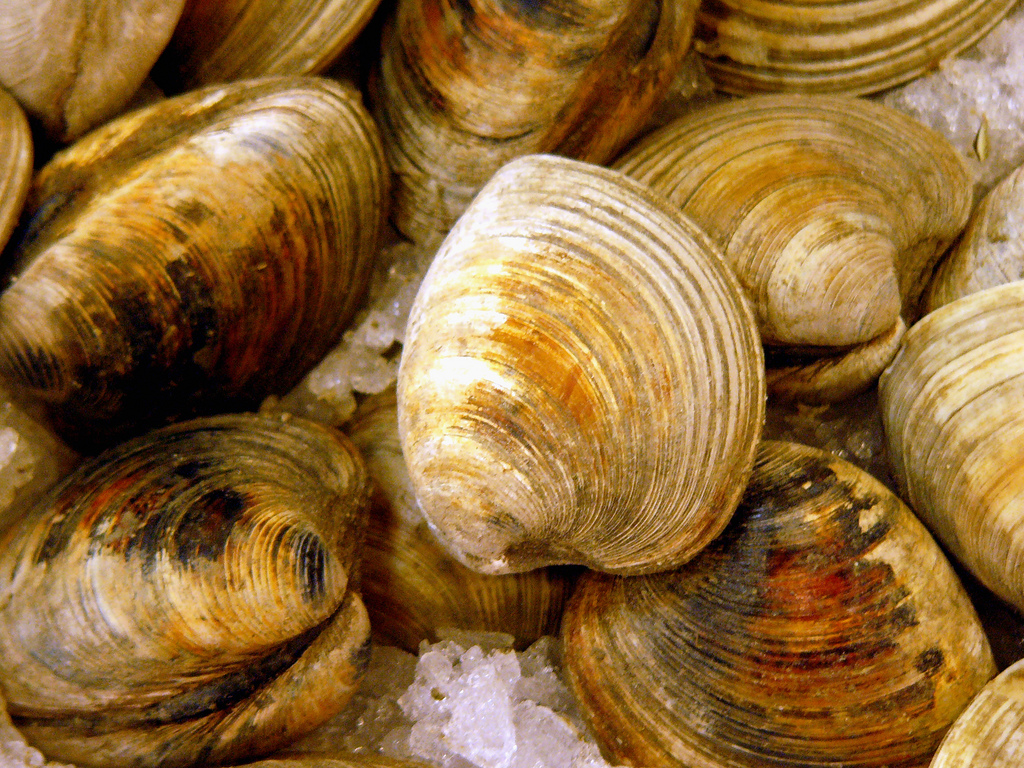 In a recent article that I read, it was argued that clams are one of the most ethical, environmentally-sound seafood choices out there.1 One of the big reasons for this is that clams do not have to be fed living things.

Instead, clams filter their nutrients from the water which surrounds them. Finfish (fish with fins that swim) and crustaceans, like shrimp and lobster, have to eat other fish or fishmeal – clams, on the other hand, filter water and make water safe for other fish (allowing their populations to thrive).

Animal welfare is also less of a concern for clams. They do not migrate or have any space or social requirements. Whether harvested from the wild or grown in aquaculture, their lives remain essentially the same.

One author described the ideal species for aquaculture as such:

“It should be a species group that does not require fish feed, does not require conversion of habitat, does not contribute to pollution, and has very little potential to be invasive. It should consist of animals who are not likely to experience significant pain and suffering in captivity in particular—animals whose health and wellbeing is at least somewhat compatible with industrial methods.”

Bottom Line: It does not take long to realize that clams fit each and every one of these requirements – making them the conscious choice for those who want to make choices based on the future health of the planet.

The Monterey Bay Aquarium Seafood Watch is considered, by many, as the de facto authority on seafood sustainability. They consider all listed varieties of clams as “Best Choices” or “Good Alternatives.”

These include the following species:

Key Insight: In fact, literally no specific type of clam is considered a poor choice for sustainable seafood – you cannot go wrong!2

Animal foods in general and seafood, in particular, raises many concerns about exposure to unwanted chemicals (Read: The complete guide to testing your body for toxins). Here’s where clams stand on each:

Mercury and methylmercury are two of the top concerns surrounding eating seafood. However, clams are considered to be in the lowest mercury category of seafood, and no restrictions are given for clam intake based on mercury exposure.3

It is possible for clams to contain aluminum, based on their sand content. This is a type aluminum called aluminum calcium silicate.

It is a type that is not (under 0.01%) absorbed by the intestinal tract. It is also not considered to be a neurotoxin and does not bioaccumulate. In fact, it is categorized on the Generally Recognized as Safe (GRAS) list of food ingredients.4

Key Insight: The drawback is that sand in clams can interfere with the bioavailability of their iron content. The sand is not within the clams themselves, washing and rinsing them thoroughly can effectively remove it.

Cadmium is a toxic metal found in many foods. It can contribute to risks of:

Key Insight: Tobacco users and those who are iron deficient are more at risk for cadmium accumulation.

The foods highest in cadmium include:

Per heavy metal assays, clams have undetectable or minimal amounts of all metals measured. The following are average values from 74 to 75 samples from a variety of regions.9 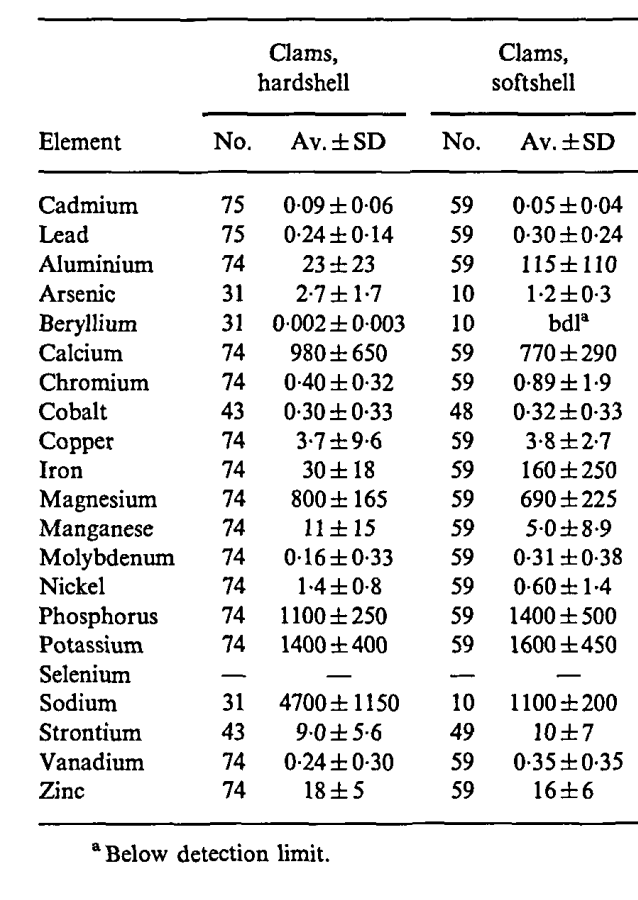 Key Insight: I did find some data that some sources of softshell clams had marginal levels of cadmium. These concerns did not apply to hardshell clams. 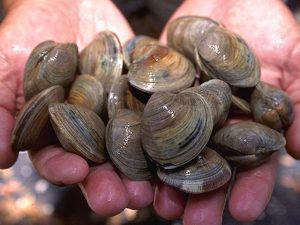 Here’s some great news, clams are ridiculously high in lots of essential nutrients! In fact, for the same serving they have:

Red meat and liver are often thought of as among the most nutrient-dense foods, but now it might just be time for them to move over and make room for clams!

Here is a side-by-side comparison I put together for you: 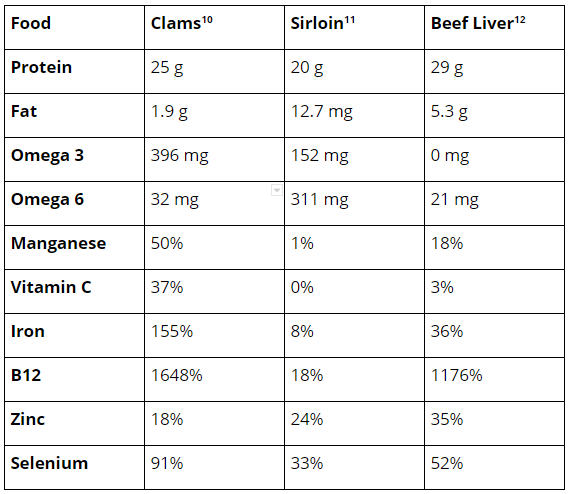 Is the Iron In Clams Bioavailable?

There have been many who have gushed about the high amounts of iron in clams, but it does take some nuance to fully understand.

Key Insight: The labeled amounts do not predict how much iron is available. Live, chopped, or minced clams may have much less bioavailable iron.

f iron is your goal, the best bet is to choose canned whole baby clams. The iron they have is in the amounts listed above, it is heme iron, and is more bioavailable. Also, do make sure to rinse them thoroughly to remove any sand.13

Like other types of seafood, clams are rich in omega-3 fats. Unlike other animal foods, though, clams also have significant amounts of vitamin C which can further aid in their iron absorption. 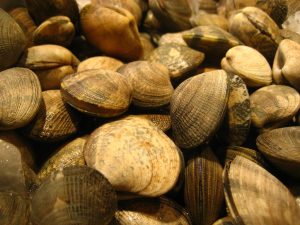 Bottom Line: If you are trying to reverse anemia, clams have more to offer than beef or even liver. Here are some complete nutrient profiles on clams.14

Along with vitamin C, clams have vitamin A and a good spectrum of B vitamins.

They are also a decent source of choline: 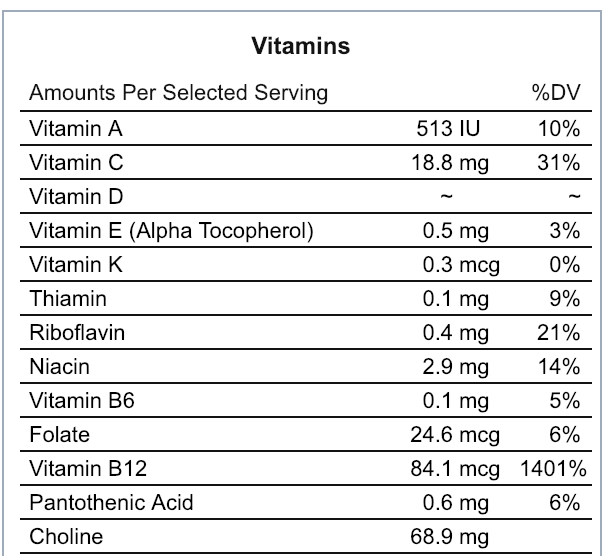 Protein quality is also excellent in clams. Quality ratings above 100 are considered to be complete.

If you take a look at the comparison between protein quantity, quality, and amino acid content between 100 grams of clams and 100 grams of bone broth.

For comparison purposes, here is the protein breakdown for a 100 gram serving of bone broth: 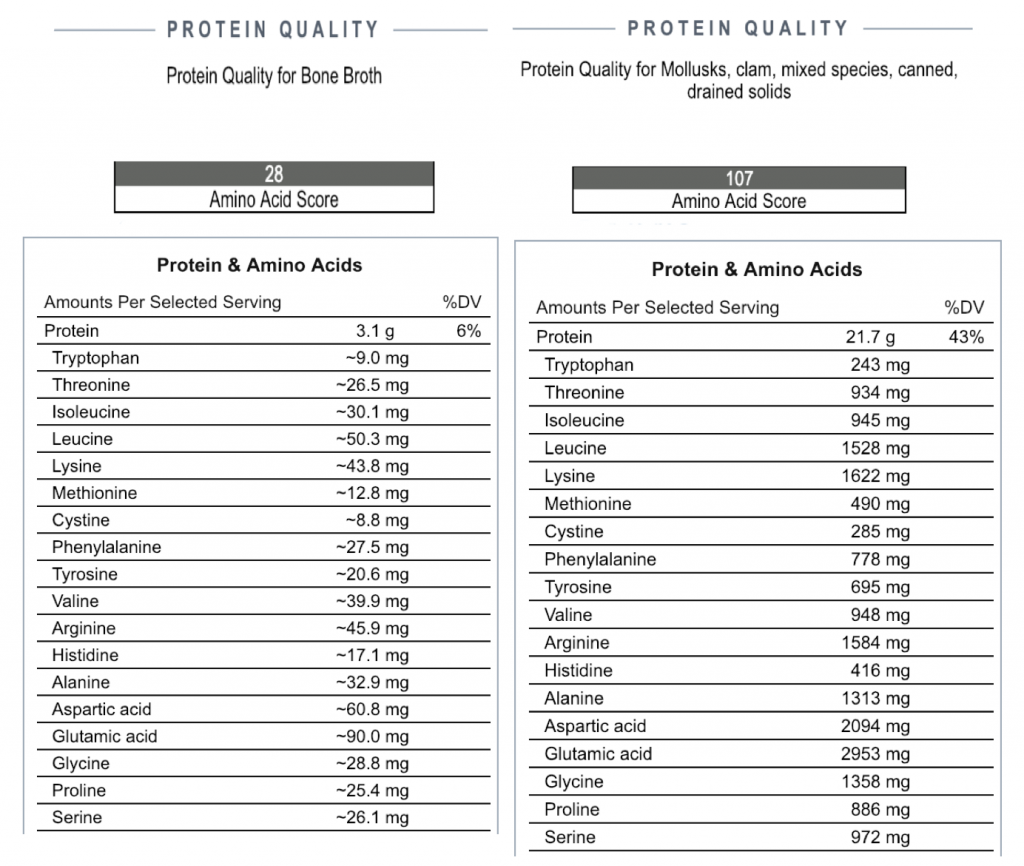 Key Insight: You can see that clams are much higher in essential amino acids and still include glycine, proline, and serine – the sought-after amino acids in bone broth.

Iron, zinc, copper, manganese, and selenium – clams are awesome! Thankfully, they are low in fluoride (as high amounts of fluoride can suppress thyroid function).

Clams do contain an average of 66 mcg of iodine per 100 g serving, much less than most types of seafood.15 As such, they can be included in a low-iodine diet as long as other significant sources of iodine are avoided.

Most who are vegan avoid animal foods for reasons related to health, ethics, and environmentalism. A subgroup of vegans has examined at these concerns and concluded that none of them apply to bivalves like:

The term they have chosen for themselves is Ostrovegan. No, it has nothing to do with ostriches. The prefix ‘ostra-’ refers to oysters or mollusks in general. Ostravegans eat no animal foods (with the exception of bivalves).

Consider the research for their rationale:

“Bivalves [like clams] . . . have a minimal ecological impact while minimizing concerns around welfare in captivity. In fact, bivalves may not just be the best option in the ocean, but the best choice if one chooses to eat animals, period.”16

The argument for health and environmental benefits for eating bivalves over other animal foods are quite clear. Many also feel that bivalves lack the same experiences as more complex animals.

While they do likely have some rudimentary sense of irritation, called nociception, which causes them to move in response to their environments. However, these same properties are found in some plants like Venus flytraps and pitcher plants.

Key Insight: It is clear, though, that they lack elaborate feelings we would call pain, and they almost certainly lack any sense of social bonding or connection.

Nutritionally, clams are a perfect complement to a healthy vegan diet. They fill in gaps surrounding:

When it comes to those on paleo diets, not only are clams accepted on all versions of the paleo diet, one could argue that clams and shellfish are among the only true “paleo” foods commercially available.

Other animal foods have been hybridized and raised in domestication. Clams are genetically unchanged since well before the days of Paleolithic humans.

This is not true of any other animal or plant food besides other versions of wild seafood. They are also one of the only wild-caught types of animal food available.

“There are two groups of shellfish: crustacea (such as shrimp, crab, and lobster) and mollusks (such as clams, mussels, oysters, and scallops). Crustacea cause most shellfish reactions, and these tend to be severe.”17

Here’s how clams factor into other diets:

Bottom Line: How cool is that? Clams are “green-light” food for pretty much everyone. The only reason not to eat them left is that you might not know how to work with them in the kitchen. Let’s take care of that while we’re at it.

There are so many options when it comes to preparing clams for consumption. Personally, I have used fresh, frozen, and canned with varying results.

If I lived in the Atlantic Northeast or the Pacific Northwest, I would do the work to get familiar with suppliers of fresh clams. Here in the Sonoran desert, though, my experiences with fresh clams have been hit or miss – even when purchased from reputable supermarkets.

Frozen clams have worked well but can be hard to find. I also did find them hard to get the texture right.

It’s for these reasons that canned clams are my favorite. I know, we often have a visceral reaction against canned food. Some antioxidants in plant foods can be degraded from the high-heat of canning.

Key Insight: These concerns do not apply to seafood. The protein, essential fats, b-vitamins, and minerals are stable throughout canning. Avoid products with colors, preservatives, and cottonseed oil. Also, watch the total added salt content.

If you can find BPA-free cans, that is great! Many companies use BPA-free cans, but do not label their product as BPA-free because of guidelines that allow zero allowable BPA under this claim. Nearly all foods now have measurable amounts of BPA, even if the levels are not significant.18

When I have had clams at restaurants, I would estimate that they included no more than an ounce to an ounce and a half of clams.

Key Insight: If you are using clams to bolster iron and protein, it is best to use a 100 gram (approx 3 ounces) serving size. With a typical 10 ounce can of baby clams, you can get just over two 100-gram servings for $1-2 per serving.

Canned clams are also great because of their shelf life. We love to have a variety of canned seafood like clams, sardines, and oysters on hand to throw together for a last minute meal.

Canned clams could not be easier to work with. Open the can and rinse the clams thoroughly. If you wish to have clam juice for a recipe, save the liquid.

* Here is how to make Kirin’s 2-ingredient tomato sauce. It is ridiculously good and you won’t believe how easy it is.

Ingredients (You may want to double this if you like more sauce):

This is another awesome dish. Great to serve on a cool day. You’ll never even miss the cream. You could substitute other potatoes but russets work best to get the texture right.