What Thyroid Tests Do You Really Need To Get?

Is testing your thyroid on your mind? Where do you even begin? In this article, I want to share with you some of the main reasons why you might want to test, which thyroid tests you should pursue, and what you can do with those results.

What I want you to know is that, while I could put a huge list of tests together, I’d rather share with you the key tests you need to know about it. More testing is not better testing, and it can often be misleading, so consider this a clear guide to testing your thyroid!

Speaking of which, I’m sure you’re tired of hearing conflicting opinions and advice on your thyroid. That’s why I’d love to help share what I know to benefit your health (Click Here: Get expert answers and support from a Second Opinion with Dr. C)

Why Are You Looking To Test?

I’ll break down each of these for you, along with the most pertinent tests, so that you know where to start and what you need to look out for when testing.

First off, we need to think about those who are possibly being diagnosed for thyroid disease. Maybe they have been struggling with their weight, not feeling well for some time, and they don’t know what is causing it.

And, now, they’ve come to expect that their thyroid might be an issue. Their doctor is going to test them, and if the doctor misses important tests, it may not reveal itself as thyroid disease (even if it is there the whole time).

In a case like this, a doctor may only test one thing: your TSH.

If someone were to have severe thyroid disease, it can show up. But, if someone is not at that worst stage, it may not show up.

What we now know is that there is a big gulf in between having normal TSH levels, and having healthy TSH levels. This means you can be in a state of not feeling your best, your thyroid is clearly off, but your TSH has not yet gone high.

This is why we refer to your TSH test as a ‘backward test.’ The higher it is, the less active your thyroid is, and vice versa. As your thyroid slows down, your TSH gets higher (Read More: Critical insight into interpreting your thyroid labs).

When we think about ranges, that normally means 0.4-4.5 as the typical ‘normal’ range in laboratories. But, when you’re on the higher side of that, it is often significant.
Key Insight: Somewhere above 1.9-2.5, the most consistently you are in this high range, and going higher, the more likely it is that your thyroid is contributing to your symptoms overall.
That isn’t to say that healthy people won’t ever have a high TSH, but they will typically bounce back down again. If you are consistently high, though, and also not feeling well in ways that lack other explanations, this can be a crucial detail.

There are also times, too, where your TSH may be perfectly optimal, but the autoimmune portion of the disease is causing your symptoms.

In cases like these, we need to check the antibodies. For screening someone to explain their symptoms, it is important to screen for both TSH and antibodies.

Keep in mind, though, that there is thyroglobulin and antithyroglobulin. We’ll come back to thyroglobulin later, but for now just keep in mind that these two may sound similar, but they are quite distinct from one another.

When someone is being screened to explain their symptoms, it can also be helpful to check their free T4 and free T3 levels. There aren’t a lot of cases in which they gave data that one would not have by seeing TSH.

That’s because they are what is known as a ‘lagging indicator,’ meaning they are one of the later things to change in the process.

There is a unique sequence happening here. If you have too much or too little thyroid hormone, the TSH is the first thing to move. The free hormones are the last thing to clearly show that, because your body works so hard to keep them at a good amount.

How Should We View TSH?

Ultimately, the main blowback for the conventional world of medicine is that they often only check for the TSH and the range. And, in many cases, they are only concerned when it is way out of range, which we know is not the full story here.

The better approach is to look at TSH, to put weight on it, but to also keep in mind that it is far more important to understand the difference between ‘optimal’ ranges and ‘normal’ ranges (Read More: My complete guide to optimal TSH ranges).

If someone is known to have thyroid disease, we also want to then think about the structure of their thyroid overall. This typically means an ultrasound test.

Those are ones that are going to help determine if the gland:

After conducting an ultrasound test, per the findings, this is also something that is likely worth repeating. Think of it as an annual test, alongside a checkup, or more or less frequently depending on a doctor’s suggestions.

Depending on the findings, other steps may also be necessary. This could include a biopsy, further evaluation, or a repeat ultrasound at a shorter timeframe to get an idea of the trend of growth (if that is an issue). 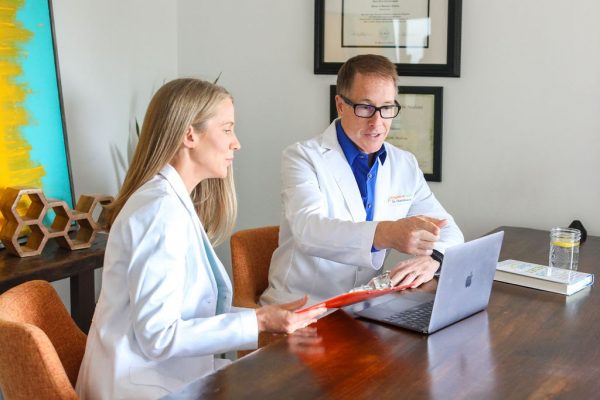 So, what if you are on thyroid treatment and your dose was recently adjusted? What do you do in that case? Well, to be honest, you can do pretty well on a TSH score.

The advantage of doing so is that it’s less tests to worry about and pay for, ultimately. If insurance covers it, that’s great, but even with coverage, too many tests can lead to a denial in coverage, which is obviously something we want to avoid.

And, the same logic applies if you are paying out of pocket for your own tests. If you can have one test and know what you need to know, then that is typically ideal.

If you do change a dose, though, and you don’t have your T3 and T4 present, you can still see the trend of whether there is more or less there.

Here, there are those that put a lot of thought into the proportions of T3 and T4, and that is coming up if someone is taking separate T3 and T4.

In some cases, you may want to know how they are working individually, but you ultimately cannot see what they are doing until they reach an extreme.

Key Insight: In these cases, I often don’t think too much about micromanaging the T3 and the T4. Getting the TSH into an optimal range, or trending in that direction, is what we need to know.

What About Other Tests?

Are there other tests that we should touch on before we wrap things up for today? I mentioned the most critical tests above, but I also want to briefly check in on the tests that we don’t really need to worry about. Here we go:

I don’t test it in my work, and I discourage people from doing so. If it is high, we don’t know whether or not it is significant. In fact, many healthy people have a high reverse T3, and it is of no consequence to them.

When reverse T3 is high, like really high, it is almost always from someone taking far too much thyroid medication. And, we already know that to be the case because their TSH is low. So, their reverse T3 test is telling us nothing new.

Key Insight: Testing for reverse T3 is not going to tell us anything new, and it really isn’t worth micromanaging or worrying about. You can hold off on this test.
You can read my full guide to reverse T3 right here (Read More: My complete guide).

Taking a total T4 test won’t teach us anything new, at least not when we have the tests mentioned above. Not only that, but it is also less precise.

Now, there may be a use case for total T3, but it is more in managing hyperthyroidism. So, it’s a bit more specific, and generally wouldn’t be needed if you were just starting out.

This relates to thyroid binding globulin. Now that we have access to measuring it, if needed, it doesn’t really help to measure this value.

The same can be said here. Now that we have free T4 measurements, this data simply isn’t as relevant or is just the same as other data we already have.

Testing Your Thyroid Can Start Today

I hope this article was instructive in helping you begin your journey of testing your thyroid. Whether you are testing because you are concerned about thyroid disease, simply want to check in, or because you have a change in dose, this should all help.

1. Schedule a complimentary consultation with one of my team of naturopathic doctors. This is a great starting point for assessing your unique health needs and treatment options.
2. Download and use my Favorite Recipes Cookbook Here
3. Check out my podcast Medical Myths, Legends, and Fairytales Here