Your Complete Guide To Adrenal Testing

Let’s talk about testing your adrenals. Here’s a quick introduction to the concept of adrenal testing. If you have unexplained symptoms, like feeling wiped out, faint, bouts of insomnia, poor stress tolerance, or anxiety, it is worth it to screen your adrenal function. There are many ways it can affect your overall health, and lifestyle can make a big difference. The first step is as simple as taking the Adrenal Quiz (Click Here: Take the quiz today) Past that point, the best testing would be a combination of: In short, that’s your best screen, full stop. And in this article, I want to dive a bit deeper into each of these, why they matter, and what they are telling you about your adrenals.
Product Recommendation: Are you at a heightened state at all hours of the day for no particular reason? The Stressed Pack can lower your cortisol. Click Here for the Adrenal Health Pack – Stressed
Contents hide
1 Explaining ‘Adrenal Fatigue’
2 The Truth About Adrenal Fatigue
3 Adrenal Symptoms Leading To Disease Risks
4 Understanding Adrenal Slopes
5 Cortisol Slope: 4 Distinct States
6 How Does This Unfold?
7 Diagnosing Adrenal Disease Versus Dysfunction
8 Should You Test Your Adrenals?
9 What Kinds of Adrenal Tests Work Best?
10 What Are The Best Adrenal Levels?
11 What Do You Do If Things Aren’t Normal?
12 Try The Adrenal Quiz Today
13 Resources

This is a concept I went into detail with when I was writing the Adrenal Reset Diet. Let’s start by addressing this idea that has created a big rift in medicine: adrenal fatigue. The conventional world says that it is silly, there is no evidence behind it, while the natural world says it is real and it gets better through supplements1.

It’s tough because these groups are talking past one another. But, there is a faulty premise behind the idea of ‘adrenal fatigue’ (Read More: Why I want to rename adrenal fatigue). The argument is that someone’s cortisol is low, because the adrenals are worn out and unable to make more2.

It’s plausible, but the circumstances are a bit different. There is a rarer disease called Addison’s disease, and this is one example of where the adrenals are fatigued because the body has beat them up (through damage caused by the immune system). The thing is that these low levels of cortisol can be identical in both adrenal fatigue and Addison’s disease, but the difference is in what the body is trying to do. What we can do to solve for that is by measuring the brain signal that is telling the adrenals what to do.
Key Insight: It’s called ACTH, and it is equivalent to what TSH is to your thyroid. It is your brain telling your adrenals to work.
In the case of Addison’s disease, where the adrenals are just broken down, ACTH is high. The body is trying to get the adrenals to work and make more cortisol, but they simply can’t keep up. In the case of adrenal fatigue, both cortisol and ACTH are low (low-normal or low below range).

The Truth About Adrenal Fatigue

In the case of adrenal fatigue, cortisol levels are low because the body simply wants a break from cortisol. The body is run down, there have been real problems from chronic stress, and there are a number of other factors that could be at play here, too.

All that said, what the body needs is to not be stimulated. It needs to rest and recover. So, while it is a real thing, it is not what we might call or term ‘adrenal fatigue’ (Read More: The top three myths concerning adrenal fatigue).

In short, the adrenals are not weak or fatigued. It’s rather that the whole system is dysfunctional and not being regulated properly. So, if we could, I’d love to change the name. For the rest of today’s article, let’s use the term ‘adrenal stress.’
Bottom Line: By the last count, there have been approximately 8,000 studies uncovering the realities of hypothalamic pituitary adrenal dysfunction, so it is a real thing!

‘Adrenal fatigue’ is real, while not aptly named. We know that the symptoms involved can lead to some consequential disease risks for many. This could include: These can all be explained by abnormal cortisol timing, as we see from adrenal stress.

One of the more dramatic examples of this entire idea of adrenal stress is known as the Whitehall II study. This was done on a group of British civil servants, between 2002 and 2006, with a large range of adults involved3. What the researchers were doing was tracking all the various health metrics, including their ‘cortisol slope.’ So, let’s start by expanding on this idea. When it comes to cortisol, we should make a lot of it in the morning and shut it off at night. If you plot those two lines together, you get a very clever slope (like a ski slope, from up to down). They have shown that the cortisol slope is independent of how much cortisol you have. So, it’s not just about whether you have enough, but if you have the right slope. This could mean you have normal amounts, but it’s the same all day, or if it is backward, or if it is always low. In this sense, it’s not bad because of the amounts, but because of the pattern of those amounts. Even the best amounts, when they don’t slope, can have a negative effect.

Breaking Down The Study

In this previously mentioned study, they were checking a variety of health metrics, like: But, what they also did was check for this cortisol slope. They kept an eye on this large group of people, monitoring things like heart attacks and death, and the results were pretty shocking. It turns out that this cortisol slope was one of the biggest predictors when it came to death, and one of the biggest predictors of cardiovascular death. In some cases, even more so than smoking status! All of this is to say that our cortisol slope is real, and it is a very big deal. It has huge effects upon our health. Now, here is the great thing: we can play our own active role in changing it.

We start with an understanding of our cortisol slope, how important it is, and then we need to dig a bit deeper into the different ways it can reveal itself. Here is the breakdown: So, let’s break each of these down a bit further… 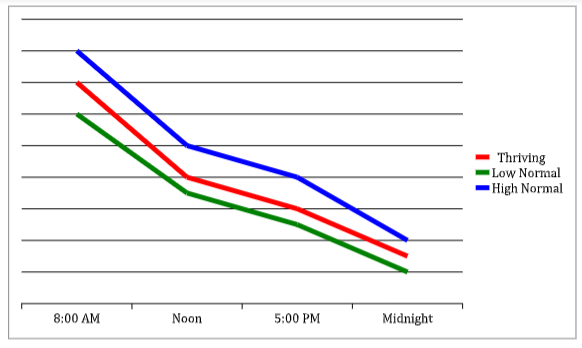 This is when you have your cortisol high in the morning, low in the evening, and your cortisol slope is looking good. There is some normal range for fluctuation, but on the whole things are looking quite normal in this stage. 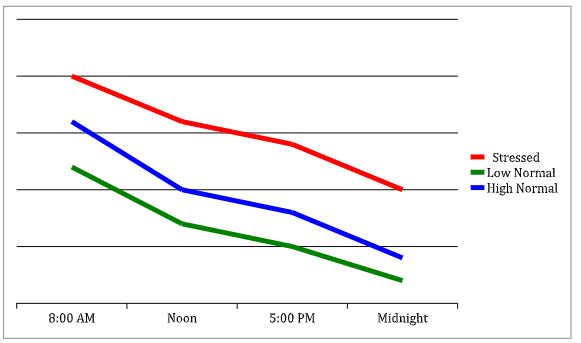 Here is where things like your chronic stress response begin to set in. Your slope is always a bit higher than it should be, and it is an indication that things are starting to go a bit awry and your body is ‘stressed’ as a result. 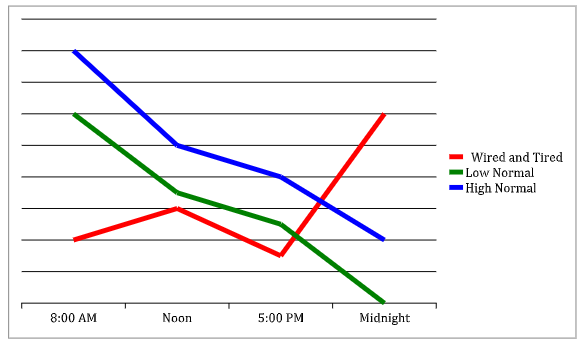 The easiest way to think about this stage is in the form of a backward slope. Your slope has become flipped: it’s lower in the morning, and higher at night. 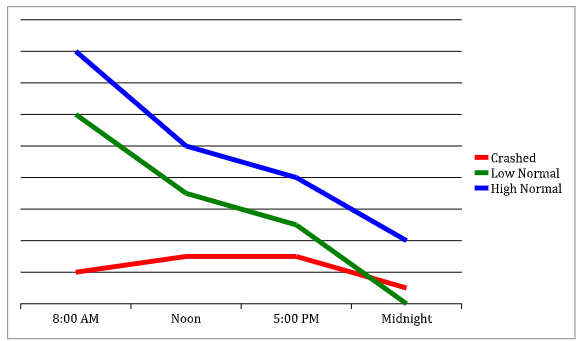 How Does This Unfold?

There have been some debates as to whether these things can unfold in a step-by-step fashion. Someone can have adrenal stress, and maybe they won’t start right away in stage one and move in a linear fashion. Maybe, instead, they will kick things off in stage three. So, the sequence is not set in stone, but the examples provided are all examples of poor cortisol slope and are proven predictors of pretty bad health consequences. And, they are also things that can be diagnosed in quite a straightforward fashion. But, how do we do that?

Let’s start with diagnosing adrenal diseases.
Key Insight: You can easily make sense of all these by simply looking at your serum cortisol patterns from your blood (as well as serum ACTH patterns).

It is common to simply look at your cortisol levels, and nothing else. But, by looking at ACTH, you can tell the difference. Here is a quick table to make sense of it all…

Should You Test Your Adrenals?

So, how do you know when you should be testing your adrenals? The first step should be when you’re dealing with symptoms that you just can’t explain. This might include: Then, we need to think about some comorbidities. This means you might have some vague symptoms that your cortisol may not fully explain, but could let you know how significant they are — it could lead to some other risks at play.

Let’s break down each kind of test and some of the key advantages, and disadvantages, of them…

These can offer you immediate hormone levels, while testing some important markers like cortisol, ACTH, and DHEA sulphate. Sometimes, though, serum tests may have variability based on movement and short-term stress levels.

Hair tests are general tests that have a longer-term average of 3-8 weeks. They are also not clinically available, and presently only used for research purposes4.

Salivary cortisol tests are accurate and helpful for evaluating cortisol slope. That said, it is not as accurate for other important markers like DHEA5.

A 24-hour urine test can be a good tool to show daily total production, but it fails to show circadian patterns. Dried urine is also not as helpful for circadian patterns, but overall urinary tests are reasonably accurate for morning and midday cortisol (but not so much in the evening)6.

What Are The Best Adrenal Levels?

Once you have the data you need, based on the above tests, what levels are the best for you? Here’s a big table to help you make sense of it:

What Do You Do If Things Aren’t Normal?

The main thing you need to know is that it can be fixed! I have talked about it before (Read More: The Science Behind Adrenal Stress), but the thing to note is that diseases have various treatments, as does dysfunction. In fact, you can even fix it promptly. We even see that someone can go from having the worst levels, to the best levels, in the span of only a few months. That’s a huge change, and relatively speaking it can happen so fast. The general ideas are, though: An easy trick is to spend some time outside, enjoy a shake, and so some reading. It’s a pretty actionable morning routine that you can enjoy, and it can make a big difference for your cortisol slope. In the nighttime, though, we want to reverse some of that: Those are some basic ideas, but there is an even greater exploration of these ideas, routines, and other tips in the Adrenal Reset Diet. Also, please take the Adrenal Quiz (Click Here: Find the quiz here) to determine your score today, along with some additional feedback.

Again, I can’t help but stress the importance of giving the Adrenal Quiz a try (Click Here: Give it a shot right now!). It can really give you a great sense of where you stand, and some of the steps you can take to help with adrenal stress. I hope you’ll give it a try right now.

P.S. Whenever you are ready, here is how I can help you now: 1. Schedule a Thyroid Second Opinion with me, Dr. C, Click Here for Details 2. Download and use my Favorite Recipes Cookbook Here 3. Check out my podcast Medical Myths, Legends, and Fairytales Here Dr. Alan Glen Christianson (Dr. C) is a Naturopathic Endocrinologist and the author of The NY Times bestselling Adrenal Reset Diet, The Metabolism Reset Diet and The Thyroid Reset Diet. Dr. C’s gift for figuring out what really works has helped hundreds of thousands of people reverse thyroid disease, lose weight, diabetes, and regain energy. Learn more about the surprising story that started his quest.